It is unfortunate that today’s young people believe that high speed car chases are cool, that smoking or drugs are cool, that war scenes in which civilians are being killed is cool, that using weapons on (imaginary) opponents is cool.
Tell you what is Cool. From my wartime experiences as a 4-year old I can tell you that it is cool to having survived, that it is cool to be standing on the ground and looking up, when the bombers arrived over our homeland and towns and started dropping their loads on us. That it is cool to write about it. That it is not cool to fly over enemy territory with a fighter plane, open a hatch and unload tons of bombs onto unarmed civilians. That it is not cool to receive medals and standing ovations many years later as a war veteran for having done so.
A little story. In the 1980s while living for many years in the Foothills of Alberta Rockies, alone on my land with my horses, I also had a Quarter Section of bare land somewhere West of Cochrane, near Ghost Lake region. It was heavily treed. I rented it out to a group of City people for playing Paint Ball. [ http://en.wikipedia.org/wiki/Paintball ] . This land was heavily treed. Usually when playing Paint Ball you stick together in a group. I had several (“cool strong guys”) to later arrive out of the trees, crying, because they got lost. When it comes to being cool, how cool is that !
Womens’ rights movement – nothing is more cool than the early fights for womens’ rights. Not so cool is, if women fight other women, or treat their elders with disrespect, as happens in many western cultures.
Cool is if women get the same rights on the job as men, same payment, same conditions, same respect, same treatment. Not cool is to discriminate against women when a company or entire industry falters (like for example the oil industry in Alberta), and women including single mothers are laid off first. As happened specifically at Trans Canada Pipelines Company in Calgary, AB. It seemed that in the 1980s no explanations were needed for these discriminatory practices in that industry.
Cool is to help yourself and others, not so cool is to wait for handouts from a government. 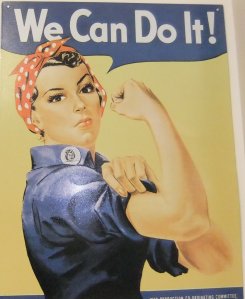 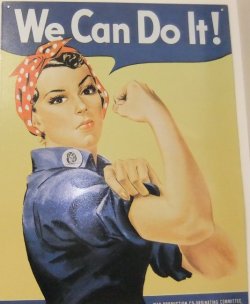 Not always only with our strength, but with ‘mind over body’. This particular very popular image depicts what happened during the aftermath of World War II with many countries destroyed and needing rebuilding, and when in those countries which needed the most rebuilding like for example Germany and Russia, and many more, only women were at hand to do all the hard work.

And what do we see now ? I take as an example Canada, one of the largest and typical immigrants’ continents of North America. A country that since 1812 did never have another war nor had any occupation by enemy nations, nor was forcing women into hard labor to rebuild the country. Wars as per Canadian statistics meaning battles, land battles, disputes, terrorist activity, gang “wars”. Where and when was ever an extended occupation of that country by enemy forces ? Yet Canada lacks when it comes to women’s rights.
With hard labor comes the responsibility of also standing in for one’s country and become completely liberated very quickly. Something that many men did not take to easily when it came to women’s rights. Look at the voting rights for women ( [ http://www.parl.gc.ca/Parlinfo/compilations/ProvinceTerritory/ProvincialWomenRightToVote.aspx ] and women’s rights in particular [ http://www.hrw.org/topic/womens-rights ].
A nice action just came onto my desk: “Women on Banknotes”. By a British Columbia Activist and author Merna Foster (writer, historian, educator, public speaker) [ http://womenonbanknotes.ca/ ]. How many women have it ever made onto a Canadian banknote. Except Royalty.
My long time experiences having lived in Western Canada, Alberta, and having had the privilege to encounter many hard working women, have made me realize how important the women’s rights movement was and still is. Not to forget, my first hand experiences as a longtime employee in Alberta’s oil industry and the discrimination within that industry against female professionals and workers. This must stop !
{See also some of my previous posts: https://renataveritasopinion.wordpress.com/2014/08/31/sexual-crimes-in-the-military/ ; https://renataveritasopinion.wordpress.com/2013/10/05/women-in-construction/ ; http://renataveritashistory.com/2014/05/26/we-can-do-it-women-in-construction/ }