From my life long observation of the ‘human species’ I must say that there are more men than women who have big bellies. [Pregnant females excepted herein]. Causes = from growing fat, life style, or beer drinking, or lack of exercise, or from bad posture or – what is more likely – from lack of caring, because as the saying goes, a men does not have to care about his appearance as much as a woman. This particular attitude is a typically male excuse. Usually, we refer to this condition as “ when will he be due for his baby ?. http://www.arimifoods.com/reasons-why-men-are-becoming-pregnant-and-how-to-avoid-it/ . Talking about – “as a man I don’t need to care” – go to any plastic surgeon and get a face life and ask yourself (or the doctor, if you know him well enough) – why don’t you ever get yourself a facelift ? Answer, most likely is: “I don’t need one, I am a man”. This may explain why most television commercials single out women as having big bellies and – Oh, those poor creatures – needing all sorts of dangerous para-medications from which they can develop anything and everything under the sun, even death. There are thousands of those stereotype commercials intended to single out women and to humiliate women. He, look at the commercials for exercise machines. Good looking male bodies. Look at the embarrassing ones (ailments from which both women and men suffer), you will only see women exposed and needing this or that obscure and questionable witchcraft medication. [And of course these are all ‘clinically proven’ whatever that means.]

BUILDING MATERIALS – “killers inside your homes” – one of the worst is ASBESTOS – http://www.doh.wa.gov/CommunityandEnvironment/Contaminants/Asbestos.aspx

This material had been used officially up to 1980 (unofficially not yet known how long). Of which Canada was one of the major producers and exporters of asbestos.

This stuff is in most everybody’s home.

Besides ASBESTOS, there is also the PCB and formaldehyde used in home construction materials. All potentially deadly products.

PESTICIDES – mostly today illegal, but how many are still used where ?

What do most of these have in common ? They are the by-products of the “great”– INDUSTRIAL REVOLUTION, and they all kill.

Wake up and smell the roses, as we say.

The first thing that should be in everybody’s mind is, CLEAN UP THE ENVIRONMENT – an environment that is home-made, people-made and causes many more deaths each year. In fact, this is growing in everybody’s own home yard. [ s.a. My post on GUN VIOLENCE https://renataveritasopinion.wordpress.com/2012/12/22/origins-of-the-gun-culture/ ]

[NOTE. This post condemns the act of terrorist attacks on any civilians. It is merely intended to discuss ALTERNATIVE WEAPONS OF MASS DESTRUCTION.]

The recent bomb attacks at the Boston Marathon have demonstrated again how dangerous the policy is of allowing immigrants from certain countries that have a completely different culture into the US – more often than not under the false pretext of being refugees.

Immigration policy should certainly be more careful about whom to admit easily, when and consider special background checks on from where immigrants are allowed. There should be much more strict background checks into “what makes a person tick”. Than there are now.

A second aspect of terrorism being perpetrated in America:As violence breeds violence, a culture of relentless exposure by the mass media to violence cannot be expected to remain unnoticed by those who are new to this culture. In many cases, though, they may not be new to that culture with media coverage stretching out worldwide. Let’s face it. Young people anywhere no matter which remote region or country or remote or different religion have the instruments to view movies made in America. Looking back several decades I have noticed how much has changed in the quality of those movies – independent of which medium is used. Through all my travels I also know that most young people in (recently considered) chaste religious societies have easy access to anything coming from North America. And what do they see ? Gun violence, murder, killings, warmongering movies (where killers are depicted and hailed as heroes), cheating, lies and corruption. And more. According to “when in Rome, do as the Romans do”, what else can one expect than that newcomers into America feel it is quite OK to do likewise. These are two aspects of looking at TERRORISM.

Fact is, there are two types of imported terrorists: (1) they deliberately get their foot into the country to do their dirty deeds; (2) they learn from what they see in their new country. And there are homegrown terrorists, who have learned from the culture they are surrounded with. [s.a. my previous post on OBSESSION WITH GUNS https://renataveritasopinion.wordpress.com/2012/12/22/origins-of-the-gun-culture/ ]

The concept of homelessness. Meaning, a person lives in the street, out in the open and does not have a specific address or dwelling. (definition = without a dwelling, as per Wikipedia). I stand corrected. Being that most dwellings have become more or less unaffordable for regular (working, having a job and a family to support) citizens, no wonder that those who decided to live in the street – rather than look for a job or even irregular work – are without a dwelling. Standing corrected again: In Victoria BC alone there are now around seven major shelters with around 100 beds (and more in the planning) for those who decided it is easier to live in the street and beg for money than to put the effort in to find some work opportunities. Work is abundant. The “homeless” shelters provide food and bedding. Health care is free. Canada – as all know is a cold country in general, not always. Summer heat can go up to 30C or over in areas. On the Pacific Side where I live now for over 10 years, the weather is milder throughout the year, but more rain and wind. That’s why we get more people here from across Canada, who lie around in the streets.

This homeless concept strikes me as controversial. What is a home ? A home is where your family is and where you grew up. Where your country is of which you are a citizen. One thing I noted is, that after years of observing the “street people” I never met one other than a Canadian, and a Caucasian. Mostly they are also men. On the West Coast, people who arrive here from other parts of Canada and declare themselves homeless mostly have a home elsewhere, where their families are.

[In contrast: in the German language we have two concepts: (1) Obdachlos = (without a roof) – homeless; (2) Heimatlos = (without a home) – without a country, without a family, without anything.] I myself am of the second kind. My country got totally destroyed during WWII, my family got killed. I have nobody. I was also homeless several times, having had to live in an old car for months, on a different continent North America, no family, just my little boy with me. And no government gave us shelter or a pennies’ worth of anything. But I found a job and work and worked my way up again. And the good part ? I never begged anybody for money.

Images showing today’s homeless, and myself with son traversing USA in our HOBOMOBILE. 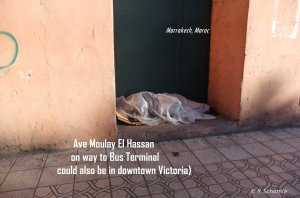 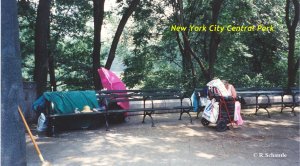 The best thing that has ever come along, has been the development of a more or less full-functioning and well functioning World Wide Web, which allows to not only access information world wide, but to also share information on a large platform and with a large audience.The WWW whose early conceptual origins date back as far as 1946, also now known simply as Web, is a way of accessing information over the medium of the Internet. It is an information-sharing model that is built on top of the Internet. The Web uses the HTTP protocol, only one of the languages spoken over the Internet, to transmit data. Major development happened between 1979 and 1991. Notably in 1980 the concept originated with Tim Berners-Lee of CERN, Switzerland [now: Sir Timothy John “Tim” Berners-Lee, OM, KBE, FRS, FREng, FRSA ], who was instrumental in the development of the Web and its common language.

By 1990, (Sir Timothy) Berners-Lee had built all the tools necessary for a working Web: the HyperText Transfer Protocol (HTTP) 0.9, the HyperText Markup Language (HTML), the first Web browser (named WorldWideWeb, which was also a Web editor), the first HTTP server software (later known as CERN httpd), the first web server (http://info.cern.ch). While the Internet is a massive network of networks, a networking infrastructure, connecting millions of computers together globally, forming a network in which any computer can communicate with any other computer as long as they are both connected to the Internet. The Internet in simplified terms is needed to network (pull) all components together.

Purpose of this article is not to get into too much technical detail, but to relate the (more sinister) usefulness of the Web. What is ‘sinister’ refers to the endless possibilities of “getting even” with those who have done injustice to others. Racism, discrimination, human and animal rights’ violations in any and of any form will now be made public. Anybody can share in it. That in itself is the most wonderful event that ever happened to help those who have been unjustly treated by other fellow humans – more than not, by large corporations – . The not so sinister side of this is the fact that anybody who had been treated unjustly can now feel better, by talking about it. Gottes Mühlen mahlen langsam, aber gerecht [literal translation=God’s mills work slow, but just]. Or, justice will be done, even if it takes a lifetime.

Finally, much gratitude is owed to all those who have freely contributed their time, knowledge and expertise in the development of software, than can be shared with all users of the WWW.